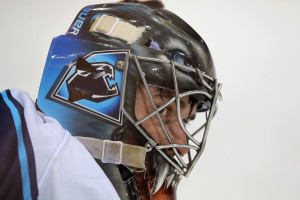 Ian is currently the Director of Goaltending/Goalie Coach of the WHL’s Red Deer Rebels. Previously in his coaching career, Ian spent time with the Seattle Thunderbirds (WHL) and Spruce Grove Saints (AJHL) with time spent in the Hockey Canada system as the goalie coach of the Team Canada U-17 program. The highlight of his coaching career coming as a member of the coaching staff of the 2017 WHL champion Seattle Thunderbirds who participated in the Memorial Cup.

Ian has had a large variety of goalie coaches over his career and would like to acknowledge their influence in his coaching style. He worked with Billy Smith and Warren Strelow in Junior and Jim Corsi and Corrado Micalef in Europe to develop his goaltending style that lasted nearly two decades in professional hockey.

In addition to his experience from his playing career, Ian attends goaltending camps and works with NHL goaltending coaches to continue to expand his knowledge as the position of goaltending continues to progress.